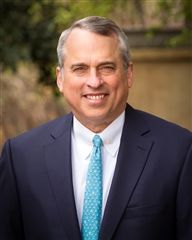 Scott McLean serves as President and Chief Operating Officer of Zions Bancorporation and is a member of the company’s Board of Directors. Zions Bancorporation is one of the nation's premier financial services companies, consisting of a collection of community banks in 11 western U.S. states with combined total assets exceeding $90 billion. Having joined the company’s Texas subsidiary, Amegy Bank, in 2002, he served as Chief Executive officer and continues to serve as Chairman.
Prior to joining Amegy Bank, Scott worked for JPMorgan Chase (previously Texas Commerce Bank) for 23 years, where he served in a number of roles, including President in Dallas, Chairman in El Paso and President in Houston.

Scott is a member of the Board of Trustees of Southern Methodist University and received the Distinguished Alumni Award in 2019. He is a past President of the Alumni Association and the recipient of the Cox School of Business Distinguished Alumni Award. He is Trustee Emeritus of the United Way of Greater Houston, where his past involvement has included Chairman of the Board, 2008-09 United Way $80 million Community Campaign Chairman and Chairman of the 2005 CEO Search Committee. In 2013, he served as Chairman of the $7.5 million 2-1-1 Texas/United Way HELPLINE Capital Campaign. Scott previously served as a director of CenterPoint Energy and as a trustee of the Memorial Hermann Healthcare System, for which he and his wife, Anna, chaired a record-breaking $3.5 million annual fundraiser benefitting the nation’s most active trauma center and Life Flight program. Additionally, Scott is a member of the Young Presidents Organization Gold and is a former Senior Warden of St. Martin’s Episcopal Church where he chaired its Rector Search Committee in 2006.

In September of 2017, Scott was asked to lead the United Way’s Hurricane Harvey Disaster Relief fundraising. This effort raised in excess of $50 million.

Scott received his Bachelor of Business Administration from Southern Methodist University and his MBA from Northwestern University J.L. Kellogg Graduate School of Management.