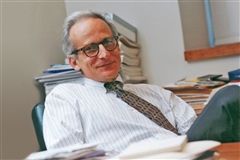 Kent Sepkowitz attended Casady from kindergarten (taught by Miss Jay) through graduation in 1971 (taught by many).  For many years in elementary school, he had perfect attendance as did his siblings Julie, Doug, Warren, and Sara, all of whom graduated as Cyclones. After college and medical school at the University of Oklahoma, he moved to New York City for additional medical training in internal medicine and infectious diseases.
Since 1988, Dr. Sepkowitz has been with Memorial Sloan Kettering Cancer Center (MSKCC) as a clinician, teacher, and researcher. He is currently the Deputy Physician in Chief at MSKCC and a Professor of Medicine at Weill Cornell Medical College. He has written hundreds of articles in the medical literature, served on national committees, and lectured widely.

For the past two decades Dr. Sepkowitz has contributed articles to numerous publications including The New York Times, CNN Opinion, The Daily Beast, and Slate Magazine. During the Ebola virus outbreak, he appeared frequently on national television, including The Colbert Report. More recently, Dr. Sepkowitz has served as a Medical Analyst for CNN and has appeared frequently to discuss the COVID-19 pandemic.

Dr. Sepkowitz and his wife, Deborah Solomon, a biographer and art critic, have two sons, Eli (a medical student) and Leo (a sports journalist). Eli is named in memory of his grandmother, Enid Sepkowitz, who taught many years at Casady. Dr. Sepkowitz has no discernible hobbies, though he and his wife love to read at night and enjoy the wonders of New York City. He also hosts a somewhat annual Sooners-in-New York party for dozens of Oklahoma ex-pats scattered throughout the Big Apple.
Back
9500 N. Pennsylvania Ave., Oklahoma City, OK 73120     |     Phone: (405) 749-3100